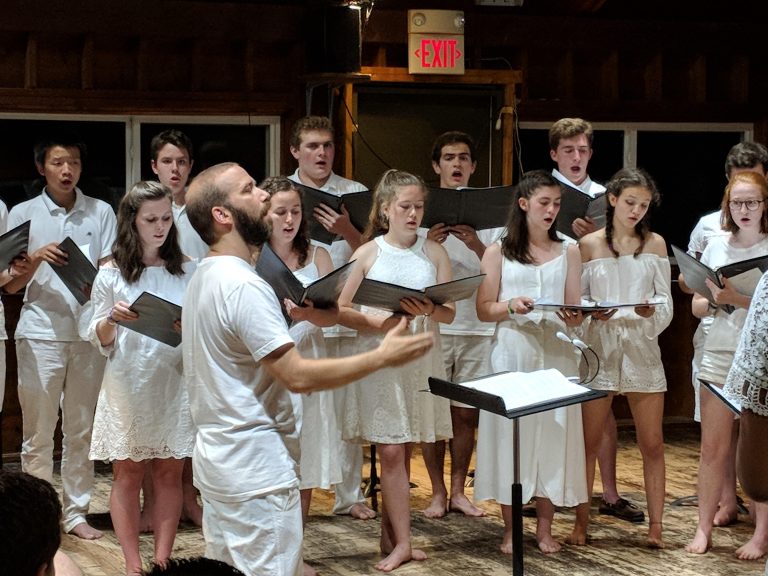 “Making singing so central,” says Nicholas Diaz, Kinhaven’s choral director, “reminds kids that they’re already artists before they even pick up their instrument, and they’re capable of plucking a masterpiece out of thin air. Singing can be one of the most vulnerable acts, so it’s a gift to be able to share that vulnerability with others.”

Nick describes the sensation of his first summer in 2016 as “walking into a place that had incredible traditions established, where the kids were already amazing musicians and readers, and trying to find my voice within that.”

As liberating as it is for students at Kinhaven to “find their voices,” Nick says it is equally so for faculty, who are given free rein to design their unique curricula. Kinhaven’s choral director is responsible for the full camp choir and smaller chamber choir. Nick has introduced chamber choir students to an eclectic repertoire, from Thomas Tallis to Debussy to spirituals, shape note tunes, and contemporary works. The full choir spends the duration of camp rehearsing a large-scale work that is performed at the end of each summer, accompanied by a faculty orchestra.

The final concert at Kinhaven is a sacred and cathartic experience, the culmination of six weeks of intense work by faculty, students, and staff. Each year, the audience is asked to forgo applause at the performance’s end, allowing the final sounds of music to linger as the students file downstairs beneath the Concert Hall for their emotional goodbyes.

Nick has directed joyous performances of Vivaldi’s Gloria, Mozart’s “Sparrow” mass, Handel’s Coronation Anthem No. 4 (My Heart Is Inditing) and, in 2019, excerpts from Fauré’s Requiem, the last notes heard at Senior Session before the COVID-19 pandemic.

Though chamber music and orchestra are at the center of Kinhaven’s programs, singing is at its heart. Each night before bed, students gather around the bell to sing the madrigals and Bach chorales that have long been part of camp culture. These “little gems,” as Nick calls them, have been around for centuries, yet they still hold immense musical and didactic value. Bell singing is done from memory, and because many of these pieces present significant rhythmic, textual, and melodic challenges, Nick spends a good portion of morning choir rehearsing them.

Kinhaven’s choral director has the unique privilege of hearing all students on the first full day of camp and then following their progress over the course of the summer. “That day of auditions, half of them are shaking in their boots, but by the end, they’ve discovered that singing can be something they love along with playing their instruments,” Nick says. The auditions are a chance for Nick to place students into the appropriate vocal sections – not as a competition – as is the case in all of Kinhaven’s musical endeavors.

Music indeed tends to materialize out of thin air at Kinhaven, famous for its impromptu tradition of singing madrigals and chorales on the balconies of the Concert Hall, in the Dining Hall, and across the campus. Nick enjoys hearing these little performances grow in frequency and confidence as he helps new students learn (and returning students refresh) them each week.

Though no music was made at Kinhaven in 2020, Nick did his part to bring our community closer. During the fall, he and Rob Davidson, staff photographer and videographer, collected and processed audio and video clips from over 40 alumni and joined them together, resulting in four glowing virtual performances of Kinhaven’s most beloved madrigals and chorales.

As Kinhaven prepares to reopen this summer, Nick is looking forward to revisiting Kinhaven’s timeless traditions in addition to its musical activities, especially the weekly folk dances after faculty concerts. “It’s another pure, physical connection to music making. Similar to singing, it’s primal, this connection to other people,” he says. “Some of the shyest kids during the first week end up being some of the most active dancers there, sweating it out.”

Like many Kinhavenites, Nick has come to think of campus as a home away from home. Thanks to the consistently inspiring and supportive faculty and students, he has felt free to express himself, and his transition into a member of Kinhaven faculty has been easy. “I think of people at Kinhaven as my family,” says Nick. “Being part of it has been one of the greatest gifts of my career – it’s brought a balance to my life, and it’s rejuvenating and enriching in every way: from my colleagues, to the students, to our wonderful chef Hugo, you truly can’t go wrong.”