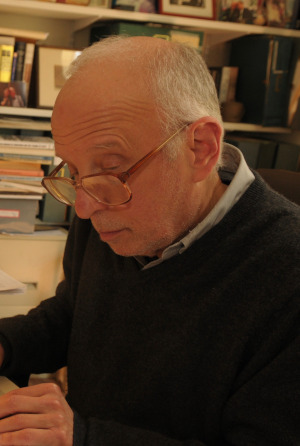 Composer Allen Shawn attended Kinhaven for four summers, from 1962 to 1965. He was a member of the first generation of Kinhavenites, as the school was founded in 1952 by Dorothy and David Dushkin. Allen’s connection with the Dushkins began before he had even set foot on campus: at the end of his final year of middle school, he gave a performance of a concerto with the orchestra, and unbeknownst to him, his parents had invited the Dushkins to attend after they had made arrangements for him to enroll at Kinhaven.

Allen was taken with the pair at once. “They were people of the world,” Allen says. “They had a very European, artistic aura around them, and they were an eccentric pair. She was tough as nails and had a big personality, and he was as gentle and soft-spoken as she was tough. I adored them both.”

From the beginning, Kinhaven provided Allen with a home away from home. Though he had attended the Dalton School in Manhattan and had grown up in an arts-minded family (his father William Shawn was the long-time editor of the New Yorker), the unconditional support he received each summer and the camaraderie between faculty, students, and staff at Kinhaven were transformative. Allen came to Kinhaven as a clarinetist and pianist, but he was also allowed to shine as a composer. During all four summers, he was given the opportunity to conduct one of his own works, each composed over the course of camp.

“I’m a neurotic person, and I used to come down with a sort of flu when I would finish my orchestral piece,” Allen says. “This happened every summer. And Mr. D always took care of me and was concerned about me. So I would always conduct my piece in a state of recovery.” He also cites cello faculty Eckhart Richter as particularly encouraging in his journey as a young composer.

“He looked at a piece I wrote the third year I was there and made some suggestions, including the addition of a muted trumpet quotation from earlier in the piece right near the end,” says Allen. “I remember feeling guilty about that, because it was a beautiful touch, and I felt I hadn’t written it!”

Beyond faculty influence, Allen recalls that of one of his friends at Kinhaven, fellow young composer Jonathan Fast. Allen credits him with exposing him to Schoenberg’s twelve-tone method for the first time; together, they listened to his Begleitmusik zu einer Lichtspielszene (Accompanying Music to a Film Scene), op. 34, which he said “completely knocked him out.” He would devote several years of his life to studying the composer, culminating in the publishing of his critically acclaimed book, Arnold Schoenberg’s Journey.

Allen, like the Dushkins before him, later studied with famed composition teacher Nadia Boulanger in Paris, whose influence he believes the Dushkins brought to Kinhaven. “This European air they brought with them contained something of the spirit of her teaching, which was, like Kinhaven, very personal, and nothing like a university classroom,” says Allen. Mrs. Dushkin’s teaching style revealed this: she conducted Bach cantatas yearly, and Allen says her feelings about the music were plainly apparent. “To feel her connection to that music was moving for all of us; it was her way of expressing her ‘faith,’ her belief—Bach!”

As far as Kinhaven leisure activities, Allen enjoyed participating in impromptu sketches, a tradition that later became part of what we now know as Wally Wampus. One he remembers in particular consisted of a mock-pretentious panel discussion on the topic “Photography: Is It Art?” which he performed with Jonathan Schell, a counselor and oboist, and campmate Tessa DeCarlo. Another comedic venture in which Allen took part was a “sometimes informational but often comic” camp newspaper, The Kinhaven Forte.  “We got into trouble with Mr. D when we published a story after some campers got a stomach bug,” he recalls. “I think it carried the banner headline: ‘Dozen Campers Felled by Disease Bordering on Nausea.’”

Kinhaven proved to be just the start of Allen’s life in Vermont, as he went on to spend three years at the Putney School, and later settled into his current position on the composition faculty at Bennington College. Though he had a world-class higher education in music and received degrees from Harvard and Columbia, Kinhaven played a special part in his musical upbringing. “It has an amazing effect on a child–placing that much value on music, and being in a community where everyone is really into it,” Allen reflects. “There was nothing snobbish, or self-conscious, or nerdy about this. Everyone was there because they were really excited about music.”