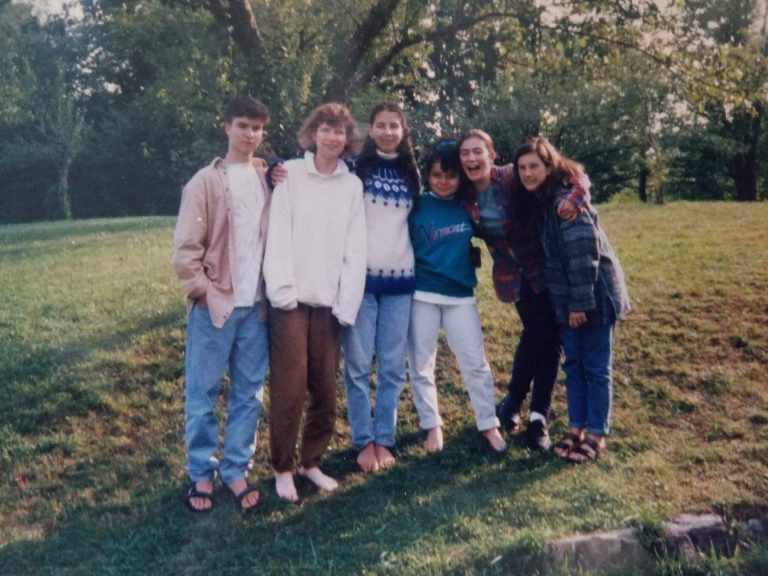 Kinhavenites have enjoyed oboe teacher Mary Watt’s wonderful qualities every summer since 1982. Over her almost 40 years at camp, she has come to embody Kinhaven’s noncompetitive spirit. Mary radiates an upbeat, determined calm in everything she does, whether coaching a chamber group on a challenging piece, helping a student with a stubborn oboe reed, or delighting an audience with her artistry. Also among her many talents, she provides her famously delicious bagels at weekly staff parties.

“Being a driven person, I read about 50 different cookbooks looking for the perfect recipe,” she says, recalling how she and her husband Peter Schultz, Kinhaven flute teacher, had missed New York bagels when they first moved to New England. “I finally settled on this one and have been providing bagels for us year-round in Exeter for a very long time.” Though she and Peter recently moved back to New York and can once again buy good bagels, Mary’s go-getter attitude continues to inform everything she does. She is deeply committed to her students’ learning and happiness as well as to her own oboe playing, often spending hours making reeds both for herself and for senior session oboists, all while squeezing in time to practice.

Her dedication to her craft has resulted in consistently beautiful, singing playing. Part of what makes her such a special musician is her expert breathing and distinct lack of physical tension, allowing freedom of musical expression and breadth of tone; her sound is pure and uninhibited. Oboe players are often tense due to the nature of the instrument, and Mary can help Kinhaven students resolve these issues, in part because of the breathing problems she had as a student.

“I was the world’s worst breather at Juilliard,” she says. “I was so bad with breathing and tension that I couldn’t play for more than ten or fifteen minutes at a time without getting tired.” However, things changed shortly after she met Peter during her first summer at Kinhaven. He had just spent two years studying with flutist Eleanor Lawrence, whom Mary describes as a breathing guru. “Peter took one look and started me on this path. I would say that’s all I worked on for the next five years, but the progress was amazing.”

Kinhaven oboists benefit from Mary’s extensive training, both from watching and listening to her play, as well as from the detailed worksheets she hands to each student at the beginning of the summer. She guides them through the processes laid out in the worksheets and helps young oboists gain control over their music-making. Along with her attention to breath control, she has a keen ear, a wealth of knowledge and experience, and is patient and analytical.

Despite being consistently busy during a typical Kinhaven summer, Mary makes herself available outside of regular lesson times and is usually just a knock-at-the-door away. Baylor University oboe professor and Kinhaven alumna, Dr. Euridice Alvarez, is familiar with this generosity. The director of the music program she attended had found out about Kinhaven, held auditions, and she was accepted along with one other student. During her first summer at Kinhaven in 1993, Eury, who grew up in Honduras, says she could hardly speak English.

“I’ve always been really brave and strong-minded, so I decided, I’m going to Kinhaven, I don’t care if I don’t speak English,” Eury recalls. Mary helped her through it, and she and the Kinhaven community were kind and nurturing. “I remember feeling at home. People cared, people didn’t look at my stature, my hair, my heritage,” says Eury. “They just wanted to help me, and to me that was just incredible.” Knowing that Eury’s oboe had numerous mechanical issues and was far past its prime, Mary gave her one of her spare Lorée oboes at the end of the summer, one that previously belonged to the late John Mack, long-time principal oboist of the Cleveland Orchestra. “I was so touched that I was crying,” Eury says. “I was able to take it back to Honduras and it got me all the way to my senior year of undergrad.”

Mary Watt is a huge factor behind the strong sense of self and community so many Kinhaven alumni possess. These characteristics are not based on competition or elitism, but rather on the joy of shared music-making with great people in a beautiful place. She encourages her students to love music fully as well as take responsibility for and invest in their personal growth. “We see Kinhaven work year after year,” Mary says. She believes the program to be “indestructible” due to its well-rounded morning schedule of lessons, chamber music, and choir, making for an incredible variety of musical activities between breakfast and lunch.