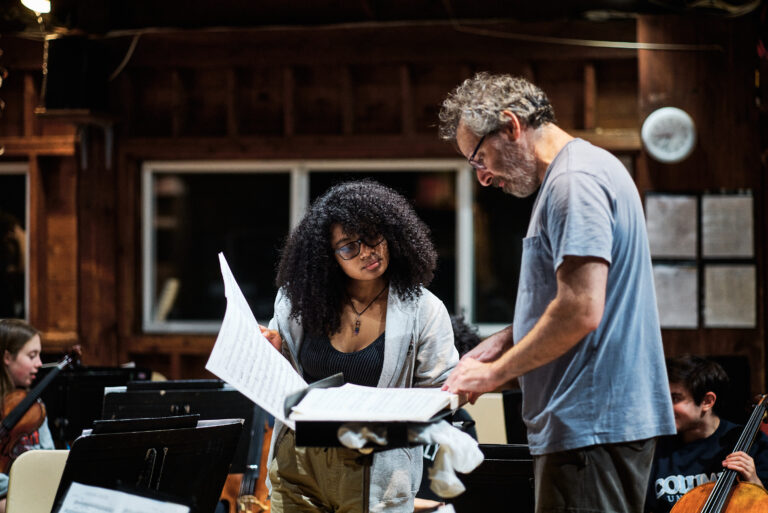 Since the summer of 1984 when he was a young violin student setting foot on campus for the first time, Kinhaven has been a part of Simon Lipskar’s essence. Every year since 2010, when he was asked to return as a conductor, he has made it his mission to share the sheer joy of making music together in the picturesque Green Mountains that he first discovered as a child.

“Like everyone else who’s been at Kinhaven, it was an utterly transformative and extraordinary experience for me,” says Simon, speaking about his time as a camper. “The best times of my young life were spent at Kinhaven.” He goes on to describe something innately Kinhaven that all who have experienced it can relate to: discovering the joy of singing. “When I was first beginning as a young conductor, I was focused on opera, so I spent a lot of time working with singers and studying singing. So much of that came from being at Kinhaven,” he says. “Singing is the lifeblood of the place. What it showed about Kinhaven is that music wasn’t just a thing you did; it was the way you lived. It was always there; at any time, there might have been music. In those days, before the beautiful tradition of bell-singing came about, it was common for kids to sing at meals, and definitely in the concert hall before every concert.”

Almost 25 years after his final summer as a student, Simon joined the Kinhaven faculty as a conductor. For 11 seasons now, he has inspired students, faculty, staff, and audiences alike from the podium. “It was amazing when I first came back to Kinhaven to have Jerry and Nancy Bidlack, Carolyn Wahl, Peter Schultz, and Mary Watt all still there and teaching 25 years later,” Simon recalls. “To see them still giving to Kinhaven in the way they always had as human beings and as musicians – such extraordinary teaching, musicianship, and generosity of spirit from all of them.” Simon exemplifies these same qualities in his lively approach to rehearsals, making sure that the emphasis remains on fun and happiness in music making. One of his trademark rehearsal techniques is simply referred to as “The Game,” in which students rearrange themselves within the concert hall into small groups of varying instruments, creating a chamber music approach in the context of the larger ensemble. “It’s become a Kinhaven tradition at this point,” he says. “The kids who know it’s coming ask about it every rehearsal. It’s such a powerful lesson in music making, first and foremost because the whole idea of the ‘musical chairs’ is to get the students to take responsibility for their music making. What we’re trying to harness is the lesson they’re learning as chamber musicians over the summer, making orchestra into something that speaks to that central focus, to try to integrate it into the chamber music program by emphasizing the ‘leading and listening’ elements of chamber music playing that are valuable in orchestra playing.”

Simon is able to blend this light-hearted method of teaching with a notable seriousness about the music itself, always choosing challenging repertoire for the students while making sure they hold themselves accountable for their own playing. “Over the years as I’ve taken Kinhaven students through the great masterworks – Shostakovich’s 5th and 10th Symphonies, Mahler’s 1st and 2nd, as examples – I’ve tried to bring them into a close understanding of what this music is all about, what the composers were trying to achieve, and why it’s our sacred mission as musicians to bring their music to life through rehearsal and performance.  The greatest compliments I’ve been offered as a conductor have come from students telling me, years later, that performing these works at Kinhaven were life-changing experiences.”

In addition to having been at Kinhaven in different capacities, Simon has enjoyed another unique privilege since he has been on faculty: the opportunity to share summers with his children, Chaim and Ruthie, who attended as percussion and oboe students, respectively. Just this past summer, his stepson Roscoe joined the club. “One of the hallmarks of my Kinhaven experience is that it’s lined up really well with my kids being able to be there while I am. This past summer with Roscoe, it was such a gift to be able to continue to have my family experiencing Kinhaven,” says Simon. “Not only because they found it to be as wondrous as I did, but also because Kinhaven feels so fundamental to me in my understanding of who I am and what my experience in life has been. To share that with my family and for them to experience that too and understand me better as a person is very precious to me.”

This past season – Kinhaven’s seventieth – was particularly special for all involved. After being forced to close its doors in 2020 due to the pandemic, Simon led the charge back to “normalcy,” conducting both Senior Session’s opening and closing weeks. “It was truly beautiful,” Simon says. “I think one has to acknowledge the simplicity of that word: to be on campus, to be in that beautiful place in the Green Mountains, to be with friends, making music together, teaching, studying, to be able to sing together, to be able to play together, was just ravishingly beautiful in every moment. There wasn’t a single person on faculty who did not talk about the times they were almost in tears. It was a powerful experience for all of us, and I think it was equally powerful for the students, being able to sense the specialness of what they were being given by finally being able to be together again. If Kinhaven’s message is the joy of making music together, the ability to be together after not having been able to for so long made it that much more powerful.”