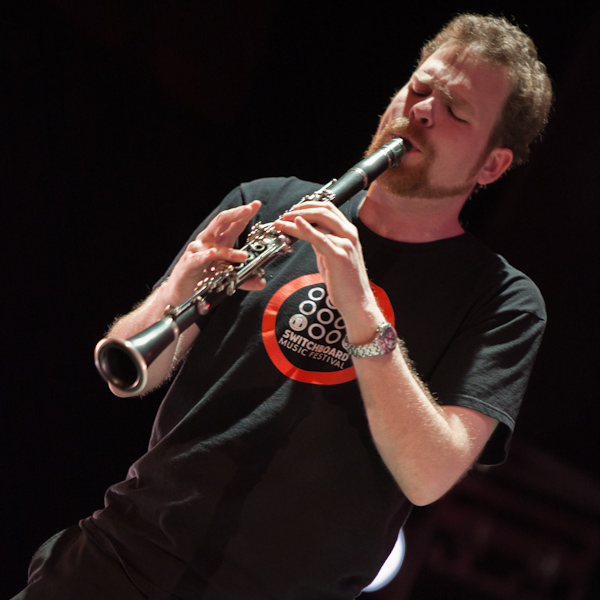 Listening to the eclectic and marvelous music of composer Jon Russell is a pleasure quite apart from his Kinhaven connection—but remembering the connection provides a delight of its own. At Kinhaven, there was very little Jon did not do. He played clarinet and wrote his first compositions (senior session 93-95), washed pots (95-98), and baby-sat then little Isaac Shultz, son of Peter Shultz and Mary Watt (1998). Between and beyond his Kinhaven summers, he graduated from Harvard with a degree in music, got a master’s at the San Francisco Conservatory, where he later taught theory, and completed his PhD at Princeton with a dissertation on Stravinsky’s Rite of Spring.

Jon’s compositions (wind, clarinet, chamber ensembles, orchestra) and arrangements have been performed by groups ranging from Imani Winds to Baltimore’s Symphony Number 1. His group Sqwonk (bass clarinet duet) has released its third album. He recently completed his fourth stint as music director for dance productions by choreographers Janice Garrett and Charles Moulton. He also performs, including, most recently, klezmer—an influence that alongside Stravinsky, makes an appearance in his Bass Clarinet Double Concerto.

At Kinhaven, Jon was a student of Janet Greene. At his first lesson, she talked about phrasing with him, an idea that he says “blew my fourteen-year-old mind.” What else stayed with him?

Sitting on the hill. Listening to the faculty rehearse. The feeling, he says, of just having music around. When he wasn’t in orchestra, he listened to the orchestra rehearse. And he listened to faculty—the first time, he says, he had been up close to professional musicians as they worked.

It was at Kinhaven that he got the idea of composing. His first summer, friends of his had some “really cool pieces” performed at the student composers concert—why not try it himself? That same summer, the choir performed Symphony of Psalms. That was his introduction to Stravinsky. Everyone was talking about Rite of Spring. So Jon wanted to hear that, and when he got home he started composing and never stopped. “It’s very possible,” he says, “that if I never went to Kinhaven, I never would have started writing music. It never would have been such a big part of my life.”

Kinhaven, it goes without saying, wasn’t only music—it was the campus, the rituals, and the friends. On the final night of senior session—at least in the 1990s—students would make a bonfire by the lagoon and spend the night there. One year, says Jon, there was a meteor shower. And he still remembers “lying with the bonfire dying down and watching the shooting stars with my friends.”

Asked what he imagines for a Kinhaven of the future, he wants nothing to change, except for opening the experience to students who would not otherwise know about it and could not afford it without help. Because young musicians everywhere should be able to, as he was, spend the last night sleeping outside, next to a dying bonfire.