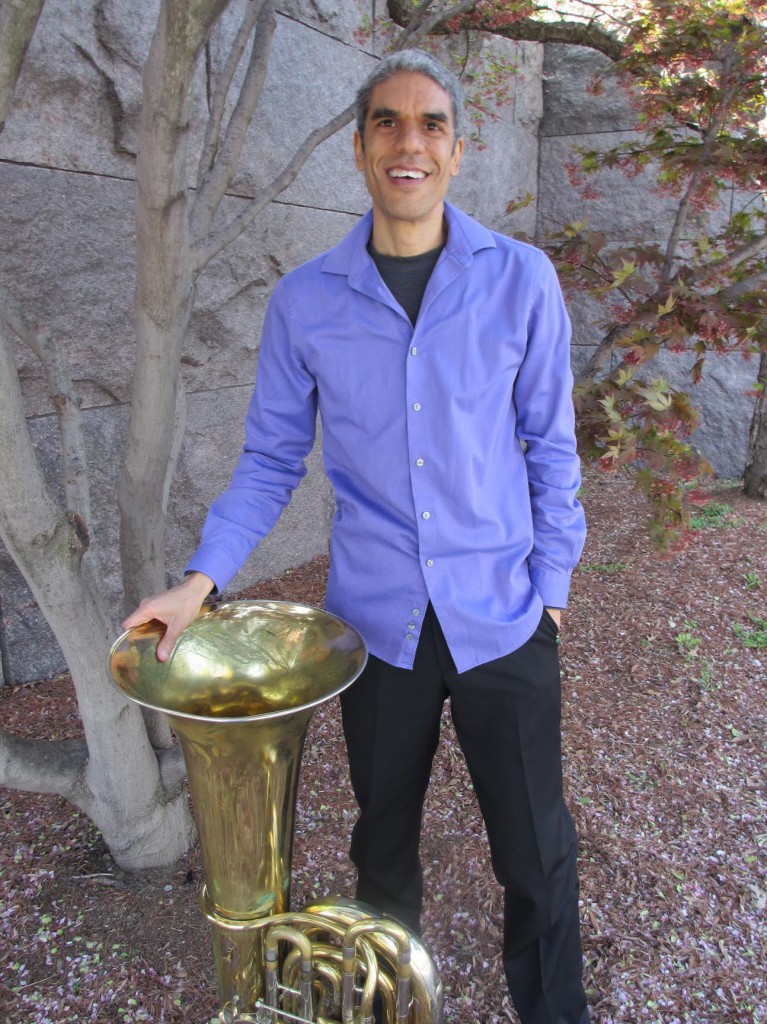 While some students attend Kinhaven with dreams of becoming professional musicians, Blair Goins (tuba ’76–’78) attended simply for the love of music. His three summers at Kinhaven were an important part of his life experience during a difficult time. “Despite some intense personal issues, I felt very connected with the faculty and to the friends I made,” he says. “The chamber music was phenomenal and the fact that you’re performing every week in front of crowds was brilliant.” Blair says those weekly student performances – their frequency and informality – helped him learn to manage his pre-concert jitters, something he finds useful today as a professional musician.

“My trajectory wasn’t linear … ” Blair says of the path he followed to becoming a professional musician (he is an accomplished composer and tuba performer based in Washington, DC). “I didn’t even think about music until, as a physics major, I realized I wouldn’t be happy doing it eight hours a day.” But he was taking a music theory class and playing in the Rochester University Orchestra. “And then it hit me,” he says. “This is something I love! So I auditioned for Eastman and went there instead.”

Blair was still not thinking about a career in music. “I tend not to plan my life years in advance,” he says, “and sometimes it’s just weeks at a time!” So with a degree in composition with primary study on tuba, Blair taught himself music typesetting, copying handwritten scores by hand. An early adopter of typesetting software, he works with performers – among them jazz trumpeter Roy Hargrove – and organizations such as the National Symphony Orchestra and the Kennedy Center to print their music for performance and publishing.

In addition to playing in various brass chamber groups, Blair is a member of the Symphony of the Potomac and the Smithsonian Jazz Masterworks Orchestra, and he is a founding member of the Great Noise Ensemble, which plays contemporary classical chamber music. “It’s like a Stravinskian orchestra, one of every instrument; there’s even a harp and a banjo,” he says. Blair is one of the group’s resident composers and says he’s fortunate to be a part of a performing group that has premiered several of his compositions. Blair recently learned he was the recipient of two Washington DC Commission on the Arts and Humanities fellowship grants, intended to further support his composing.

Blair says Kinhaven’s informal atmosphere spilled into all aspects of camp life. “In the main house, there was a fireplace with big tables. I would hang out there and chat with David or Dorothy [Dushkin]. The idea that you could hang out with the founders of this place was amazing.” Blair also remembers former Director Jerry Bidlack’s sense of humor and warmth. “I loved his leadership of the orchestra – he inspired me to play well. Perhaps it was because he seemed to love the music he was conducting.”

We don’t expect every student that comes through Kinhaven to become a professional musician. Blair is a great example of how to take the lessons from Kinhaven’s camaraderie, acceptance, and intense musical experience and make it your own.

Would you like to be profiled in the Kinhaven blog and newsletter? Send your contact information to news@kinhaven.org.