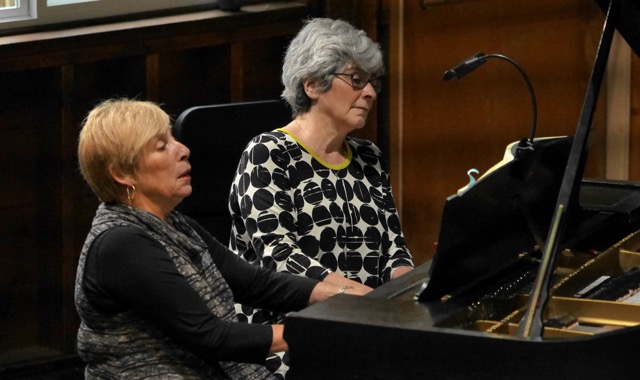 Barbara Sherman and Susan Nisbett met at a chamber music workshop, but didn’t start to become close friends until they met again at a birthday party. When Susan saw an announcement for the Kinhaven Adult Piano Workshop, she asked Barbara if she thought she might like to attend. Susan’s sister, whose daughter Laura Barbieri attended Kinhaven’s junior session, hadn’t heard of it, “but she did tell me how good the food was!”

This summer will mark Barbara and Susan’s twentieth year of playing piano four hands together at Kinhaven.

Each began playing piano at an early age – Barbara at 8 and Susan at 9. Barbara became a lawyer, and “piano saved me, and my soul, from that,” she says. Susan studied piano very seriously, but stopped during high school to try dancing, something she kept up until her sixties, and she has always sung in a choir. She earned two degrees in French literature and became a journalist. But when her daughter began piano lessons, Susan thought she should go back. “And that’s how, at age 38, I became obsessed, practicing maybe three to four hours a day.”

During their first year at Kinhaven, Barbara and Susan played Ravel’s Mother Goose Suite. They played it again in 2013, switching parts. “It’s exalting music,” says Susan, “you want to cry at the end of your own performance.” One of their most vivid memories from that first year was the copious rain, which, as they remember, was of biblical proportions. “The ground began to swell and heave, and springs began to sprout up,” Susan recalls. Cold and soaked to the bone, almost all the faculty and students trekked to the Vermont Country Store to buy identical yellow raincoats and shoes.

The two friends describe piano four hands as an “intimate choreography.” “We have to share that space, feel each other breathe, touch arms – we become a four-handed pianist,” says Susan. Barbara adds, “We’re together so much. We eat together, sleep in the same cabin, and then we’re at the piano for six hours a day. So when I leave Kinhaven and return to my own piano I feel Susan’s presence – or absence – like a phantom appendage.”

Asked what has made their piano partnership so durable, Barbara says, “Whatever chemistry makes people good friends, it’s the same thing when you play together.” This level of closeness isn’t for everyone. Susan says, “You have to love the other person in a partnership like this. And when we first sit down to practice together, it’s ‘Yeah, this is what it’s supposed to be!’ What a joyous thing!”

They both have high praise for Director Leander Bien’s leadership: “Leander makes sure everybody is happy and thriving, and he occupies his time to make the experience extraordinary.” The students and the non-competitive atmosphere are also important, they say. “Kinhaven is devoted to the refinement of what you bring and shapes it for a concert.”

The coaching staff are the main reason Barbara and Susan return to Kinhaven year after year. “The coaches know they won’t change our approach in four days, but they’re very good at finding things we can improve right away,” Barbara says. “They suggest ideas or provide insights that quickly result in a much more refined, convincing, and expressive performance.”

They also look forward to the intensity of the one-week workshop. They recall working on the slow movement of a Schubert sonata one year. “We did come prepared, but then we started digging in to the music, and one evening we worked and worked and worked, talking through the most minute issues,” says Susan. “It was miraculous,” Barbara agrees.

Equally important are the friendships Barbara and Susan have made at Kinhaven. After the week is over, they find it difficult to leave. “It’s just too painful a rupture, too painful to leave the ‘Brigadoon thing.’” Susan says, “Sometimes we even see our fellow students in between Kinhaven sessions. We care about them deeply. We all share something special.”