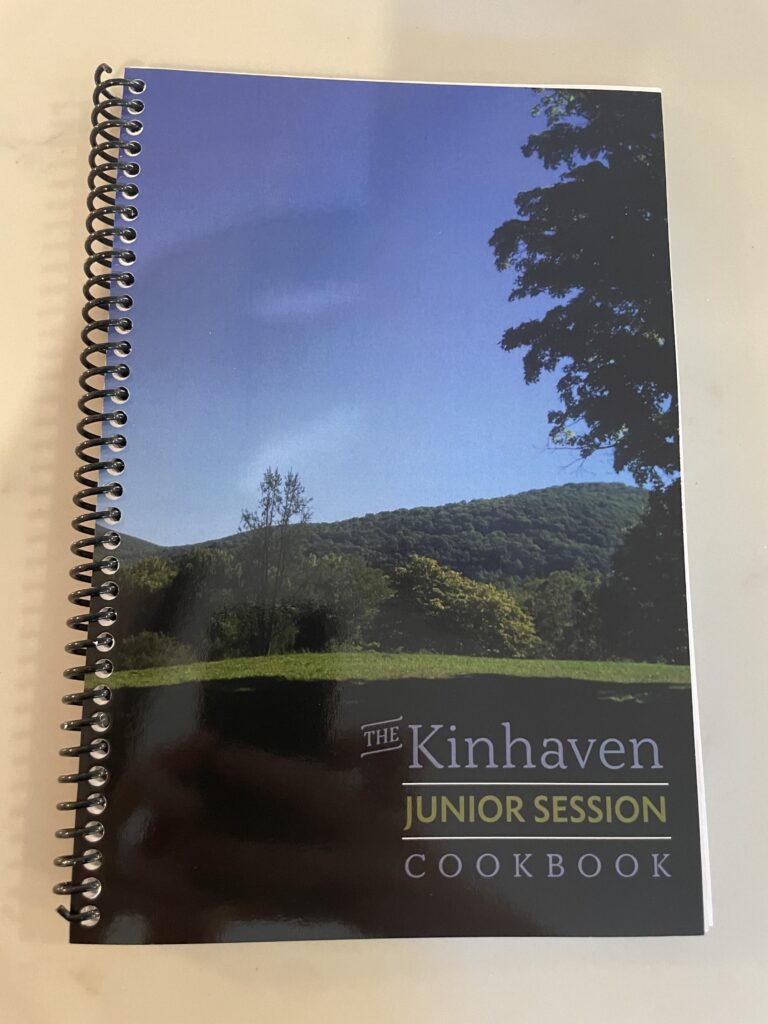 Kinhaven Music School is famous for its delicious, home-cooked meals, made to serve 120 people. Cooks from Kinhaven Junior Session present this collection of campers’ favorite recipes–from Spanish Rice to Anadama Bread to Butterscotch Brownies–reduced and tested for home use so you can now enjoy your favorite Kinhaven culinary memories right at home!

Cookbooks are sold for $40 and all proceeds from the sale of this book will benefit the Nancy S. Bidlack Memorial Commission Fund. The fund will commission composers from historically marginalized groups to create original works for middle school-aged students.

As we enjoy the cool weather of fall and the changing of the leaves, some people long for pumpkin spice this and pumpkin spice that, but true Kinhavenites long for something much more fleeting: Butterscotch Brownies.

During the spring of 2020, as much of the world was shutting down due to the pandemic, a group of cooks from Kinhaven’s Junior Session came together remotely to help address the concern of Butterscotch Brownie cravings, and along the way decided to promote social change through music.

The last Kinhaven Cookbook, which was written almost 50 years ago, was created to document how the Kinhaven Kitchen functioned and make sure that the next crew of cooks knew how to nourish 120 people during camp. Since the publication of that cookbook, the Kitchen has grown and changed in many ways, but the cooks made sure to keep records of recipes, old and new, in a large binder that lives in the Kitchen year-round. By 2020 the need seemed to be the opposite: everyone was asking for smaller versions of Kinhaven recipes so they could make the food at home.

For over a year, Molly Bidlack Bean, Nicole Daley (me), Sophie Kossakowski Kälin, Devon Nelson, Loran Diehl Saito, and Max Saito worked to create a new edition of the Kinhaven Cookbook, the Junior Session edition. First, we needed to decide which recipes to include. Of course, there would be the traditional favorites, like Butterscotch Brownies and Spanish Rice, but we also wanted to add newer well-loved recipes, like Breakfast Casserole and Shakshouka. Next, it was months of reducing and testing the recipes to make sure they produced the right amount of food for about 4-5 people. After all that, the real work began of creating, designing, and editing the final product, which included pictures and stories that made the cookbook feel more like a storybook about the Kinhaven Kitchen that also happened to include several dozen recipes.

As the cookbook was taking shape, the cooks realized that they needed to figure out where the profits would go. Obviously, all proceeds would go to Kinhaven, but was there a way to focus the project to make it even more meaningful? Through dozens of discussions, the idea was born to have the proceeds go towards helping effect social change. The cooks decided to support composers from historically marginalized groups to create original works for middle school-aged students. And soon the Nancy S. Bidlack Memorial Commission Fund was established.

By August of 2021 the Kinhaven Junior Session Cookbook was complete and is now available to everyone. So, if you’re longing for a loaf of Challah or a bowl of Kinhaven Chili, you can have the recipe right at your fingertips, while also supporting a great cause through the Nancy S. Bidlack Memorial Commission Fund. And don’t worry, the recipe for Pumpkin Bread is also included, so you can still have your pumpkin spice this and pumpkin spice that.

To purchase your own copy of the Kinhaven Junior Session Cookbook, or perhaps to start your holiday shopping early this year, please visit https://www.levellerspress.com/product/kinhaven-junior-cookbook/.